How Much Does An Oil Change Cost? Are They Worth It?

The cost of an oil change can vary depending on your engine’s size and what type of oil it needs.

You should expect to pay between $50 and $75 for a synthetic oil change.

This article will explain what an oil change is and how the cost is made up. How much you’ll pay will vary from situation to situation. Still, this article should give you the necessary understanding of whether or not the cost is worth it.

Check out these articles comparing different types of multigrade oils.

What Does Motor Oil Do?

Engine oil, or motor oil, sits in a metal container in your engine called the sump. When the car’s running, the oil pump forces the oil through a series of pipes and channels in the engine. It flows past the engine’s moving parts, reducing friction and removing heat.

Modern oils are also filled with additives. These additives help to prevent rust and sludge buildup, keeping the engine in good condition.

The most common problem within the oil system is either a leak or a blown head gasket. Follow the links to read up on those topics in more detail. With proper regular maintenance, high-quality engine oil will keep your car’s engine last for a very long time. In most newer cars, you’ll only have to change it every 10,000 miles or so.

What’s Involved In An Oil Change?

When you take your car into the services for an oil change, the technicians will… well, change the oil. They should also change the oil filter at the same time. Most companies also include optional extra services, such as a car wash, vacuuming out the interior, or topping up the other fluids. Walmart is a good example of this – follow the link above or click here to read about an oil change at Walmart.

I’ll go into it in greater detail later in this article, but, in short, the technician will get underneath the car, usually by raising the vehicle on a four-post or two-post ramp. They’ll open the sump plug and allow the motor oil to drain out. Once most oil is sitting in the oil pan rather than the sump, they’ll remove and replace the oil filter. Next, they’ll replace the sump plug and pour the correct quantity of oil back in through the cap on the top of the engine.

How Much Does An Oil Change Cost?

In the US, the cost of an oil change will vary with the type of oil used and the quantity needed.

Keep on scrolling down to learn more about the different types of motor oil.

At its cheapest, a standard oil service with conventional oil could be as low as $20 (see Walmart’s official prices). At the other end of the spectrum, Walmart charges about $50 for a fully synthetic oil change.

Fully synthetic oil changes may cost more than this if you have a larger-than-average engine or it requires a specialist grade.

Therefore, a reasonable estimate for an oil change is likely to be between $50 and $100.

I would always, always recommend paying the extra amount to get fully synthetic oil if you have a vested interest in your car. As most of us probably do.

How Is The Oil Change Cost Broken Down?

Unlike with many things that need doing, shops tend to have fixed rates for their regular service jobs. Unless you have a very particular engine, you’ll probably pay the same amount whether you drive a Smart or a Mustang.

Where I used to work, how much the customer paid depended on their engine size and the car’s age, but it didn’t vary too much.

In general, a garage will decide on the price for an oil change service based on the average labor time and oil quantity used for a service, so this is technically what you’re paying for.

Would It Cost Less To Change My Own Oil?

In most situations, it would cost less to change your oil in a DIY job. Sometimes, though, it costs a consumer much more to buy oil off the shelf than it would an auto business. This difference can be so significant that you may as well just take your car to a professional anyway. This is more often the case here in the UK, where fully synthetic oils from the shops tend to cost over £10 ($13) per liter, compared to $5 to $7 per liter in the US.

The main downside of changing your oil in a DIY job, rather than getting it done by a technician, is you can’t stamp your service book – there’s no valid service history when you come to sell the car. As such, it could lower the final value of your vehicle. Whether or not you take that risk is, of course, up to you.

It would also be worth considering the fact that the work won’t be insured if you do it yourself. Writing a little warranty note and handing it to yourself doesn’t count, sadly. If – in the unlikely but still possible – situation where you do something wrong and cause damage to the car, there’s nothing to protect it. You’ll have no choice other than to pay out to fix the damage or scrap the vehicle.

However, you’ll usually pay less for a DIY oil change regarding the raw initial cost. To purchase an oil filter and fully synthetic oil, you should expect to pay between $30 and $50. As such, you can expect savings of about $25 to $30 by doing it yourself.

Depending on how long this job takes you, that may or may not be worth it.

Why Does The Oil Need To Be Changed?

Over time, oil breaks down. It doesn’t last forever. Sludge forms within the channels and the sump, and you end up with oil that doesn’t really work anymore.

The oil’s job is to lubricate the moving parts. It puts a barrier between metal components, reducing friction and removing heat, keeping everything flowing along smoothly.

Engine oil functions as a lubricant between metal surfaces.

As time goes on, the oil degrades. Although relatively recent technological advances mean that the oil lasts longer and cleans your engine through as it flows (such as fully synthetic motor oil), it will inevitably need to be changed eventually.

The main disadvantage of multigrade oil is that it doesn’t stay multigrade forever. To get multigrade oil, VIIs (Viscosity Index Improvers) are added to the oil by the manufacturer. They cause the oil to behave differently at different temperatures and are basically molecular-sized slinkies. Eventually, the engine’s movements will literally chop up these particles, meaning the oil is no longer multigrade.

Once that’s happened, you’ll need to change the oil. Without removing the oil, there’s no practical way of telling whether any of this has happened. Instead, manufacturers recommend changing the oil every few thousand miles (usually between 7,500 and 12,500).

Changing the oil at regular intervals ensures you don’t end up with a poorly functioning motor oil. This would result in a damaged engine, which is both dangerous and costly. That’s why it’s so important to change the engine oil when necessary.

How Do I Change My Oil?

In this section, I’ll run through a quick guide on how to change your oil. Please take this as advice only and don’t attempt an oil change without an experienced person on hand. Although it’s one of the more straightforward tasks on a car, it can occasionally go wrong.

You’ll also need to be in a safe, flat environment. Ideally, you should use a ramp if possible, but for most of us, those aren’t available.

The car needs to be flat to allow the oil to drain out properly. If it’s slanted, some oil will get stuck in the corner of the sump and therefore not come out. 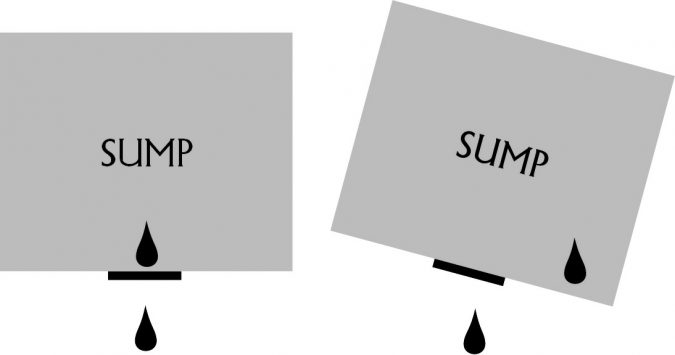 If the car isn’t level, some of the oil in the sump won’t drain out properly.

Then the car needs to be safe. You’ll be working underneath it, so it’s imperative that it doesn’t fall on you or run over you. Take extra precautions to make sure this is the case and, if you’re in any doubt, it’s best to take the car somewhere else before getting started. Once the oil’s out, you won’t be able to drive the vehicle.

Before you start, you should also have some way of disposing of the oil. It’s illegal to dispose of motor oil down drains and can lead to HUGE fines. So don’t do that. You’ll probably either have to call someone up, take it to the local tip, or ask a friendly mechanic if they might get rid of it for you.

What Are The Different Types Of Oil?

As mentioned previously, you can get a few different types of oil in the US.

Here’s Engineering Explained to take you through conventional vs fully synthetic oil.

How Much Does An Oil Change Cost In The UK?

So why does an oil change cost more here than in the States?

To take a very simplistic viewpoint, the average oil is of a higher quality. That’s not to say it’s always a good thing – it makes owning a car considerably more costly and therefore difficult for the average person, for example.

Although we’re no longer a part of the EU (at least, mostly…? I’m not sure, sore subject), Britain has been part of the Union for 47 years. The same regulations applied across the continent also applied to us on our island. EU regulations – from what I can see, at least – tend to be stricter than those I’ve seen in the States, especially when it comes to environmental issues. Another factor to consider – although I haven’t found any definitive sources to prove or disprove this – is the vast difference in oil production. Most of the oil found around here comes from offshore oil rigs in the North Sea; most of the oil we use is imported from Norway.

It’s clear from this that one might expect oil-based products to be cheaper in the US than in the UK.

An oil change shouldn’t cost too much, either way. As we’ve looked at in earlier sections of this article, there are pros and cons to both arguments.

If you’re confident enough and you’re driving a relatively old car, it’s probably worth changing the oil yourself. That’ll minimize your cost at the time.

Otherwise, feel free to take your vehicle to the nearest mechanic that you trust. As mentioned before, companies such as Walmart offer this service (with mixed opinions as to the quality).

Overall, an oil change is likely to cost you somewhere between $30 and $100, depending on a few factors.