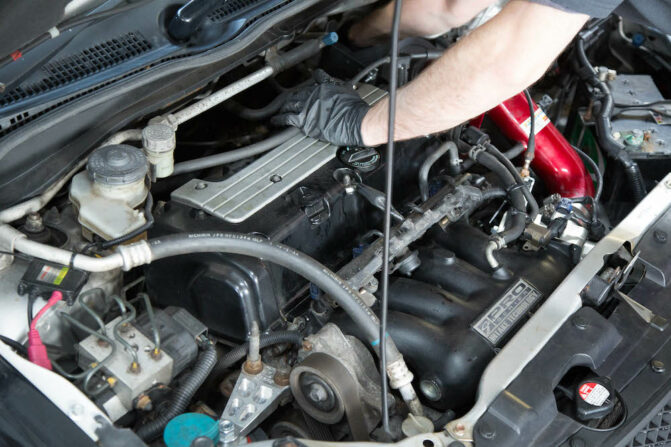 The inner workings of modern cars these days are reliant on a vast network of sensors and electronics dotted about. While we can sometimes chide how these sensors often break, or how they’d add such a heavy dose of complexity to repairs, we can’t argue against their benefits. They’ve made cars so much more efficient, less polluting, and powerful. Yet, there are issues such as a P0106 error code that we dread.

If you’re sensing that your car isn’t working right, the first step towards diagnosis would be to plug in an OBD diagnostics tool. But what if you’re getting a P0106 error code, and what does it mean? The accompanying warning message might say, “Manifold Air Pressure (MAP) Barometric Pressure Sensor Electric Circuit Output Range and Performance Problem”. A lengthy explainer, so how does this work?

Quite simply, it may denote that your car’s MAP sensor, or its electrical circuitry and voltage readings, have gone awry. This is crucial, especially for fuel-injected vehicles. By measuring the air pressure at your intakes, the MAP sensor can best optimize your engine’s power and performance. Meanwhile, it’s also able to help maximize fuel economy. So, what should you do when a P0106 error code appears?

How Does A P0106 Error Code Relate To The MAP Sensor?

First, let’s take a peek at what a P0106 error code is related to, in the first place. As we mentioned, it’s tied to your car’s MAP sensor, or ‘manifold absolute pressure’. It’s one of the many sensors that gauge and monitor your engine’s operation. In particular, engines that feature fuel injection, which account for almost every vehicle sold today. The MAP sensor can be found mounted in the intake manifold.

What it does, is continuously measure the amount of air that’s flowing into the engine, through your intake manifolds. In doing so, the MAP sensor is connected to your car’s central computer brain, also known as an ECU. Data collected by the MAP sensor concerning air pressure, air density, and the flow rate of the air will be passed onto the ECU for proper analysis. It’ll then start crunching airflow data.

With the ECU now aware of how air is rushing into the engine, it could make appropriate adjustments of how much fuel to pump into the engine for an optimal air-to-fuel ratio. And, it may also influence the engine’s ignition timing, either to advance (ignite faster) or retard (ignited slower) than necessary. In its measurements, the ECU will correlate input from the MAP sensor with the engine speed (RPM).

You shouldn’t confuse the MAP sensor with a MAF (mass airflow) sensor. Both perform similar duties, whereby they’d be able to measure the amount of air entering it. Usually, engines use a MAF sensor, located in front of the throttle bodies. Meanwhile, a MAP sensor is found on the intake manifold, or at times, behind the throttle bodies. Turbocharged engines, however, may feature both a MAP and MAF sensor.

How About Between P0106 And The Barometric Pressure Sensor?

Another component that a P0106 error code might otherwise make mentions of is the BAP sensor. Or, the ‘barometric air pressure’. In most areas, the BAP sensor and the MAP sensor have roughly similar functionality. Whereas the MAP sensor calculates absolute pressure, your car’s BAP sensor measures barometric pressure. This relates to the atmosphere of the air that your car is driving through.

For example, the barometric air pressure can be quite different depending on where you’re driving. A drive through most roads at sea level wouldn’t incur penalties. Nevertheless, imagine if you’re driving on a mountain pass, thousands of feet above sea level? With differences in barometric pressure of the air around you, the BAP can gauge this, and pass on the relevant data back to your car’s ECU.

The ECU will now be able to keep informed of how dense or thin the atmosphere is. Once again, data from the BAP sensor will help the ECU to make adjustments to how much fuel to pump in, as well as the ignition timing. At higher altitudes, there will be far less oxygen that the engine could rely on for combustion. In this scenario, it would require a differing volume of fuel to be pumped into the engine.

Therefore, the BAP sensor (combined with the MAP sensor) can best optimize your engine’s power and efficiency. With a precise injection of fuel into the engine, it could eke out as much power as possible. Unlike the MAP sensor, the BAP sensor (sometimes known as the BARO sensor) is mounted on the rear firewall in the engine bay. Or, it’s sometimes tucked inside of the fenders, near the wheel arches.

What Does It Mean When You Have A P0106 Error Code?

A P0106 OBD error code could be defined as “Manifold Air Pressure (MAP) Barometric Pressure Sensor Electric Circuit Output Range and Performance Problem”. If you see this P0106 error code appear, that means the car’s ECU (or depending on the vehicle, the PCM, or ‘powertrain control module’) detects a faulty or erratic reading with the MAP or BAP (BARO) sensor. There is always a defined threshold.

MAP sensors should relay back a signal to the ECU with an air pressure reading between 1 to 4.5 volts. However, if the pressure readings fluctuate rapidly, or if the reading is far below or above this limit for a long time, it’ll trigger a P0106 error code. At idle, the air pressure data (measured in voltage) should be around 1.5 volts. At higher speeds, with a ‘wide open throttle’ (WOT), this rises to around 4.5 volts. There are a myriad of reasons why your car detected a P0106 error code. In other words, a faulty MAP or BAP (BARO) sensor. These can include…

What Causes Your ECU To Throw A P0106 Error Code?

What Are Some Other Relatable OBD Error Codes Besides P0106?

If you happen to find problems with your MAP (or sometimes, the MAF) and/or BAP (BARO) sensor in your car, you might also encounter several other, similar error codes. If you happen to notice any of the other diagnostic trouble codes mentioned here (alongside P0106), it’ll help during the diagnosis and troubleshooting process, by narrowing down the key point of failure. These can include: When your engine is throwing a P0106 error, it’ll most likely be accompanied by problems with the air-to-fuel ratio in the engine. In most engines, the ‘stoichiometric’ ratio is 14.7:1. Meaning that for every 1 gram of fuel, there are to be 14.7 grams of air for a suitably combustible mixture. Should the MAP and BAP sensor fail (or either one), it might throw the air-to-fuel ratio out of balance, affecting ignition.

A faulty MAP or BAP sensor would cause imbalances in your engine’s air-to-fuel ratio. It might run rich (too much fuel, too little air) or lean (too much air, too little fuel). Therefore, the symptoms should be immediately noticeable, which includes…

What Are The Symptoms That Accompany A P0106 Code? While some of the aforementioned symptoms might not appear too serious, it’s crucial that you have a P0106 error code inspected, promptly. At the very least, you’ll have to endure lethargic or unreliable performance. But if not resolved right away, a faulty MAP and/or BAP sensor could prematurely wear and cause catastrophic damage to the engine. The latter will be far more expensive to fix.

Improper ignition timing can lead to significant amounts of pre-detonation in the engine. This’ll cause other issues, such as damaging the engine’s internal components. This encompasses the pistons, rods, rod bearings, and numerous other parts. Therefore, it’s recommended to get a P0106 diagnostics error code looked into and solved right away. But before we do that, it’s always a good idea to diagnose.

We can conduct simple tests and diagnoses to try and pin down the exact cause of a P0106 error. We’ll start with…

Step 1 – Visually Examine And Inspect The Condition Of The Sensors

The first and easiest diagnosis we could perform is a visual one. Locate both the MAP and BAP (BARO) sensors on your car. It’s better to have the owner’s manual, or a dedicated repair and service manual for your specific make and model of vehicle. It would help locate it more precisely.

In general, and repeating our previous point, here’s where you can find them: Once you’ve found either the MAP or BAP sensor, take a close look externally. Inspect the hoses that feed air into them, to ensure they’re not clogged or cracked. Also, make sure that the hoses are sealed tightly against the sensor housing, or else air might leak past them.

Then, take a peek at the connectors and other wiring attached to them. Note down if the connectors are disconnected, have rusted, melted, cracked, or feature any other noticeable damage. For a more thorough diagnosis, you may disconnect the sensor, and look at the pins to see if there’s damage.

While you’re there, take a good look inside and through the hose with the sensors disconnected. Are there any signs of debris clogging up the hoses? And, remember to look for contamination, such as ingress of water, dirt, or other unwanted contaminants.

Step 2 – Measure The Voltage Readings Of The MAP Sensor

Next up, we can diagnose the erratic readings from the MAP sensor. To do this, you’ll need some tools beforehand: If that’s all good, you can proceed with simulating air pressure rushing through the MAP sensor:

Finally, let’s test the wiring on the MAP sensor:

If there’s a substantial fluctuation in the voltage readings from your diagnosis up above when your MAP sensor is faulty and needs to be replaced. As a point of reference for the voltage output (which may differ depending on your vehicle): However, there are a few ways where we could try to bring the MAP sensor back to life. Some quick fixes revolve around cleaning it:

As with most car electronics and sensors, the MAP sensor isn’t a fixable item. Most often, it’s easier as well as cheaper to simply place it outright when they fail. Thankfully, MAP sensors don’t malfunction frequently. Any faults commonly occur on higher mileage vehicles, with 100,000 miles or more on the clock. Another slice of great news here is that MAP sensors aren’t terribly expensive to replace.

On average, you’re looking at around $100 to $250 for a complete MAP sensor replacement. This cost accounts for both labor and parts. This is helped by how easy it is to access the MAP sensor, and how simple of a component it is to replace. If you’re keen to do it DIY, it should be fairly straightforward:

That pretty much rounds up our look at a P0106 error code. As we’ve learned, it can appear due to the MAP sensor (or BAP sensor) failing in your car. When they do break, they can cause a myriad of issues to appear. From poor and unpredictable performance, rough idling, as well as poor fuel economy. All of which are symptoms that you should never ignore, as they can lead to permanent engine damage.

If the MAP sensor is not replaced right away, your engine’s air-to-fuel ratio will remain off-balance. It could force your engine to run with too much air or fuel at any point in time. Or, throw off its ignition timing completely. Both of which, if unresolved, could easily scrap your engine altogether. Besides, a MAP sensor replacement is relatively inexpensive and painless, given the consequences of avoiding it.