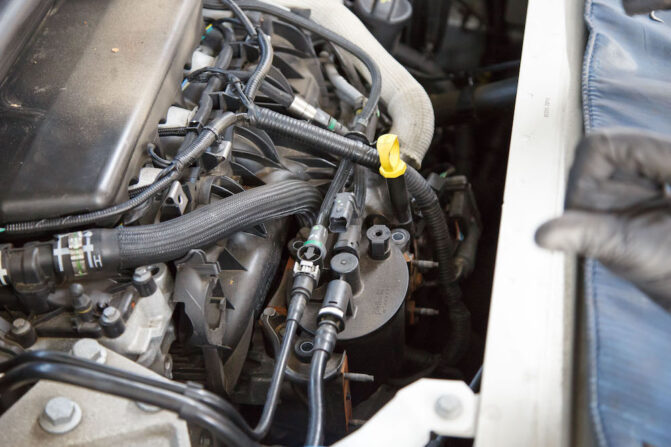 In most cars today, there is an abundance of systems and fitments designed to minimize fuel usage as much as possible. Higher MPGs is an easy win-win for your wallet and the environment. Hence, why it’s no wonder that so many cars feature clever tech like EVAP control, ensuring that not even a single fuel molecule is wasted away. Alas, it only works until a P0496 error code appears.

Your car’s EVAP (or ‘evaporative emissions control’ system) is a key inclusion in many newer vehicles. Its role is quite simple – creating an airtight vacuum seal around the gas tank. Thus, making sure fuel doesn’t leak out into the atmosphere, which is a major cause of air pollution. Plus, preventing diesel or gas from being wasted, as the EVAP keeps them sealed inside the gas tank, ready to be burned.

For the most part, and it’s been this way since the 1970s, EVAP systems are fairly reliable and don’t require a lot of maintenance. But unlucky you, EVAP controls are still susceptible to fuel vapor leaks, which can prompt a P0496 error code to appear. While it might seem trivial, fuel leakage isn’t just a serious safety hazard, but it could put a serious dent in your wallet, as well as a car’s driveability.

What Is Your Car’s EVAP System, Anyway?

Before we get into what a P0496 error code means, it might help to provide some context as to what an EVAP system does. So, how does an ‘evaporative emissions control‘ device work on your car? Fun fact; automobile emissions not only come from the tailpipes following combustion. Alternatively, it could also emanate from your fuel system, through what’s known as “evaporative emissions”.

This is the case, as fuel is an extremely volatile compound and could evaporate at room temperature. In doing so, it releases extremely harmful organic pollutants into the atmosphere. It’s applicable for gasoline more so than diesel, as the latter is a slightly more stable compound. Nevertheless, fuel can evaporate when exposed to warmer or sunnier weather, creating smog and other hydrocarbons.

Worse, it’s worth remembering that tailpipe emissions are only emitted when the engine’s running. Evaporating fuel, meanwhile, occurs 24/7 anytime there’s fuel in the tank, even when your car isn’t being driven. It’s been estimated that evaporative emissions account for around 20% of any vehicle’s lifetime pollution. Every single year, those tiny molecules of fuel could add up to nearly 30 gallons.

That’s 30 gallons of fuel leaking out of your gas tank in the form of uncontrolled vapor. However, it can be controlled, thanks to the advent of EVAP systems. In layman’s terms, an EVAP system creates a seal around the gas tank and your car’s entire fuelling system. With this seal in place, it’s harder for even tinier fuel particles and vapor to escape the tank, keeping it sealed tightly inside the tank.

What Are The Components Inside An EVAP System?

Before we look at how it all works, it might prove handy to get acquainted with the individual parts that make up the entire EVAP system. In particular, they include: How Does An EVAP System Work?

Interesting, creating a seal around the gas tank and fuelling system is much harder than it seems. An EVAP system still needs to allow air to vent into the gas tank to replace liquid fuel that’s pumped into the engine. Otherwise, and if the gas tank is sealed off completely, the fuel pump can create negative pressure inside the tank. With all that suction from the pump, this could collapse the gas tank.

As we highlighted earlier, an EVAP system is typically made to last a long time, and require minimal servicing. The charcoal canister, for example, uses charcoal that isn’t made to run or wear out over the vehicle’s lifespan. Nonetheless, the EVAP unit is still vulnerable to failure, as is the case with a P0496 error code. An accompanying message reads, “EVAP Flow During A Non-Purge Condition”.

Note those self-checks that we detailed before. The EVAP system regularly runs diagnostics tests on itself and reports back to the ECU. One of those tests involves making sure there isn’t an untimed or unwanted ‘purge flow’. The latter is defined as the final step in the process, where the excess fuel vapor is purged and flown into the engine. Before leading into the combustion chamber to be combusted.

But let’s say the excess fuel vapors flow through a vacuum when the system isn’t purging. Or, in other words, seeing fuel vapor being purged without the ECU telling it to. Not to mention the presence of a vacuum when there shouldn’t be any. In addition, if the vacuum is much higher and sticks around a bit longer. Should the fuel tank pressure (FTP) sensor detect this, your ECU flashes a P0496 error code

With your EVAP system’s programming, there’s something called a “purge-free cell”. These are those moments in which the EVAP system shouldn’t be purging fuel vapor into the engine. Should vapors continue to flow anyway during a purge-free moment, that’s when it triggers a P0496 error code. An ECU should be able to analyze changes in fuel trim when an EVAP purge has been activated.

Oftentimes, the most likely culprit of a P0496 error code is a faulty canister purge valve (or solenoid) and/or vent valve that’s stuck open. Consequently, this leads excess fuel vapors to flow through into the engine freely, even when it’s not supposed to. Although, there are many other possible causes of a P0496 error code, such as: As noted earlier, the most common EVAP-related problem pertains to either a faulty purge or vent valve. There are two types of valves that are typically used. Mechanically-operated EVAP systems use a vacuum valve, which opens and closes depending on vacuum pressure. Meanwhile, electronically-actuated EVAP systems rely on solenoid valves, which open and close through applying voltage.

What Are The Symptoms Of A P0496 Error Code?

Unfortunately, any symptoms accompanying a P0496 error code are alarmingly subtle. You aren’t able to notice it most of the time. And, since the EVAP system is an enclosed unit, you might not be able to spot, hear, or feel any problems at all, let alone an issue with purge flow. Pay close attention, and it’ll show itself eventually, which include tell-tale P0496 symptoms such as: How Can You Diagnose A P0496 Error Code?

Initially, it may appear as though a P0496 error code is rather trivial, and doesn’t require immediate attention. True, purge flow issues will, at first, result in you having difficulties with starting the car up and turning over. However, it could quickly snowball from there. For starters, it’ll undoubtedly lead your engine to run in a richer air-to-fuel mixture than is ideally recommended.

A rich-running engine won’t be ruinous from the get-go. With that said, and ignore it for too long, it’ll begin to significantly place accelerated wear on your engine. Rich fuel mixtures will cause permanent and often irreparable damage inside the engine. At which point, you’ll have to spend thousands for a complex rebuild or replacement process. Therefore, a P0496 issue should be addressed promptly.

Although, knowing where to start with fixing a purge flow problem in your EVAP system can be fairly tough. Thus, a thorough diagnosis will be required, as you try to determine and pinpoint the points of failure that triggered a P0496 error code in the first place. You can begin by…

Grab an OBDII diagnostics tool, and extract all possible error codes stored in the ECU. This includes a P0496 trouble code. If you find other error codes that point to more plausible issues elsewhere, try to diagnose and resolve those ones first before returning to P0496:

Next up, we could start undertaking a physical diagnosis of the purge valve to see if it’s opening and closing properly. We’ll be assuming from the get-go here that the purge valve-slash-solenoid is stuck open:

This step is going to be far more advanced and may require some special tools to proceed. First, let’s take a peek at the fuel tank pressure (FTP) sensor to see if that one’s broken, instead:

Next, we can conduct an EVAP leak test:

If there isn’t a vacuum leak anywhere in the EVAP system, then you’ll have to evaluate the fuel tank pressure (FTP) sensor more closely:

Final Thoughts (And Solutions) For P0496

As we’ve seen so far, our diagnosis points to three very likely suspects for triggering a P0496 trouble code. It’s either a bad canister purge valve, leaky vent lines and vacuum hoses, or a faulty fuel tank pressure (FTP) sensor. If that’s the case, then a prompt replacement of either part (following an in-depth diagnosis) will be necessary. Their approximate costs (including labor) are around: As you can see, the costs for resolving a P0496 trouble code for good are relatively cheap. That’s when compared to the side-effects of delaying repairs, such as continually letting the engine run rich. That could, in time, cause significant internal damage and wear inside the engine. To a point where a simple repair won’t suffice. Remember that engine replacements or rebuilds cost thousands.

Beyond that, there are other consequences to not fixing an EVAP purge flow issue. Your ride won’t perform as well as it used to, with poor performance and difficulty starting. Additionally, you’ll now have to worry about a damaged catalytic converter, which costs at least $1,000. In all, a P0456 error, while not that serious at first, should be fixed ASAP to avoid pricier repairs down the line.