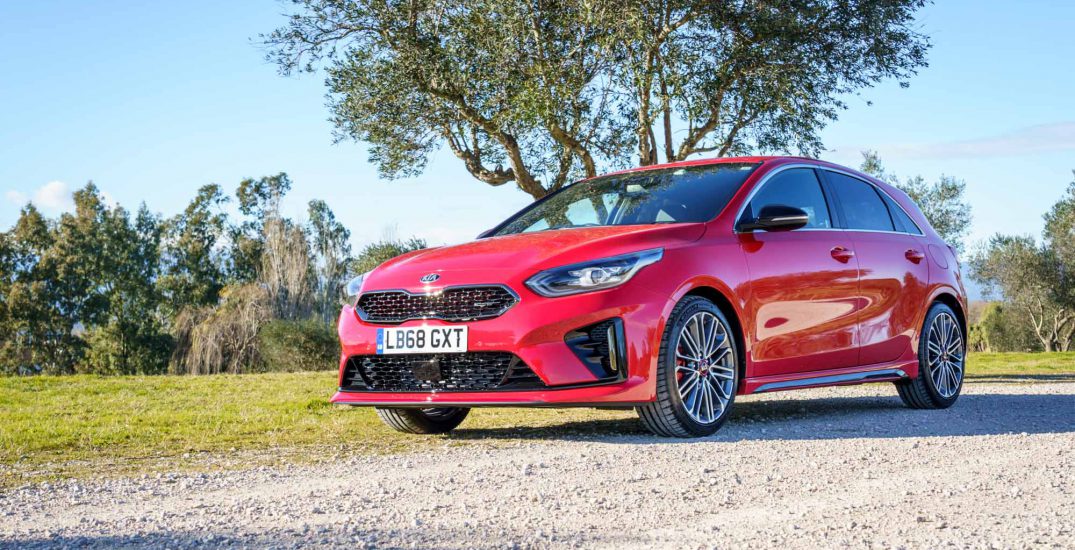 We had the opportunity to test the latest Kia Ceed GT. But will it live up to expectations?

The Kia Ceed GT is the hot new version of the hatchback from the advancing brand. The new model has a powerful 1.6-litre turbo petrol engine, which creates 201 bhp and 265Nm of torque. While it is no Civic Type R on paper, you can still have fun with this car. The Kia Ceed GT has been specifically designed and tested in Europe to create driving characteristics that have been optimised for our roads and driving styles.

This latest version certainly looks the part. You can see the car has a new front bumper design with exaggerated air intakes and gloss black trim. The Ceed has a new headlight design that incorporates Kia’s four lamp ice-cube running lights in the headlamps rather than in the lower section of the bumper. Take a closer look at the front end of the vehicle and you will see an updated tiger-nose grille with a more subtle GT logo. The sides of the honeycomb grille are accentuated with red highlights, showing a discreet sporty side to the car. Side on, the proportions of the Kia Ceed GT are perfect. It has 18-inch aluminium alloy wheels as standard, and note the GT version of the car features red centre caps. Thereby making sure that those in the know are aware that you are driving the fastest version of the car. The rear of the car now includes a small roof spoiler and gloss black diffuser, which manages the air flow from the top and bottom of the vehicle. The Kia Ceed GT is available in eight different colours from its launch. Getting behind the wheel of the Kia Ceed GT for the first time lived up to my expectations. The car doesn’t take itself too seriously. It’s not a Type R track time chaser – it is built to be fun and engaging for the driver and that is the feeling you get from the car. The driving position is easy to set up to feel like the car is an extension of you. We tested the manual version of the car, and straight away, I felt all the controls were well positioned. After driving on curved and fast flowing roads, the power output from the Ceed GT at 201 bhp seems more than ideal for enjoying yourself. You can put it in sport mode to make it more responsive and heighten the sound of the car. The sound is synthesised in the cabin and helps you get into an enthusiastic drive. It is quite throaty and gives the impression that you are in for a thrilling journey! In a straight line, the car accelerates quite well, with little to no torque steer at the wheel from our dry testing. You can enjoy the feel of the six-speed manual gearbox as you go through the gears. Cornering is where the car really starts to demonstrate its superior handling set-up, influenced by Kia engineer Albert Biermann. Extensive European tuning has been undertaken to perfect the ride and handling performance of the new Ceed GT. This means that for UK customers, the vehicle should feel great from day one, which our test drive confirms! The steering wheel feels very well balanced and demonstrates the level of grip that the tyres have up front well. Improving the car’s handling performance further, the Kia Ceed GT comes with Michelin Pilot Sport 4 tyres. The suspension keeps the car flat in the corners and is not too hard on the potholes. The interior has undergone several updates to emphasise the model’s sportiness. There is now a black roof liner, a D-shaped steering wheel sporting the GT logo and sleek aluminium pedals. The driver and passenger seats are very comfortable and are finished in black leather and suede. The boot of the Kia Ceed GT is the same size as the standard model, with a capacity of 395 litres. The car makes good use of space, with a split-level boot floor allowing for storage underneath. The Kia Ceed GT, offers an experience that has been a bit neglected in the market. Whilst some manufacturers have chased performance figures, Kia have focused on how the car feels and kept it affordable and reliable. This model is suited to daily driving, but when the roads are quiet, take the opportunity to open the car up and explore the rev range. It makes for a very rewarding driving experience. The Kia Ceed GT is a well-rounded proposition. It has all the practicalities of the previous model, except with a sporty yet efficient flair. It is a credible sporty hatchback. But how does it compare to the Hyundai i30N? In my testing, the i30N was a more hardcore and sharper car than the Ceed GT. In fact the Ceed GT is almost 50bhp off the i30N.

So the Kia Ceed GT plays in a different area, that is perhaps more adult, less in your face, but still with plenty of fun to be had. Those looking to buy will get the benefit of Kia’s incredible 7 year, 100,000 mile transferable warranty. Let’s not forget that over the years Kia has done very well in customer surveys with regards to value and reliability so buying now means that you no longer have to explain it to your friends.