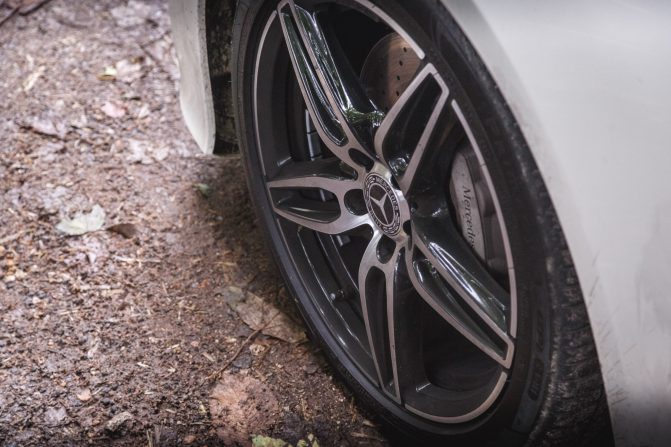 The latest high performance saloon to be born from the gates of Affalterbach is the Mercedes-AMG C63. In its newest form, the powerhouse under the bonnet has in the most part, been taken directly from the purest AMG model, the AMG-GT. The only difference being the C-Class has a wet sump version of the engine. There’s been some worries about this new C63, with people concerned with AMG’s decision about moving from a 6.2 naturally aspirated system to a 4 litre twin turbo. But fear not petrol heads, AMG have listened to your reservations about the car losing its lunatic character, and have piled it in by the shovel load in this new offering.

First of all and possibly the most important factor, the noise. We’ve been well looked after in this department, with the use of the new AMG Switchable Performance Exhaust. With this almost essential extra, you’ll get two additional butterfly valves in the exhaust system. Sound boring? Well when you experience them you’ll know what I mean. Dependant on the driving mode you’re in, or indeed if you just push the little button in the control panel, you can open up these valves. The only way I can describe the effect is when you open the windows in a thunderstorm. Plant your foot on the accelerator and you’ll have that famous AMG symphony flowing through the airwaves and by the time you’ve realised what’s hit you, you’ll realise you’ve got the most ridiculous grin on your face. This is partly down to the noise, but also down to the way you get thrown back into your seat. We’ve got the Edition 1 C63 S, which has a monstrous 510hp and 700Nm of torque, which makes it quite a challenge to keep the rear tyres happy. It doesn’t take much to have the assistance systems kicking in, keeping you on the straight and narrow.

Keeping you on the road

One of the most important systems, and one that you’re likely to use quite regularly, is the 3-stage ESP system. The whole thinking behind the C63 is to give the driver a dynamic, emotional driving experience, whilst still being usable and instilling confidence. This ESP system allows the driver to tailor the level of intervention, depending on the environment it’s being used in. For example, when in “comfort mode” the ESP system is set at its highest level, meaning the dynamics of the car will be relaxed and easy to drive, the slightest possibility of tail-out antics being stamped out before anything dramatic happens. At the other end of the lunacy scale you’ve got the ESP tuned to its lowest level. In this setting, the car will take reference from various sensors like yaw rate, steering angle and wheel speed, to allow a small amount of rear-end slip before kicking in. It’s quite an impressive system, and it tops off the whole experience driving the ultimate high-power saloon car. I’ve experienced this system in a track setting, and it does instil confidence in your driving skills. It almost feels as though the car is willing you to go faster and faster. Turn the system off and unless you’re the Stig, you’ll be out in the gravel trap pretty sharpish. Leave it to do its thing and you’ll be leaving trails of black lines and white smoke in no time at all (on a track, obviously).

Mercedes-Benz and safety go hand in hand. On a normal day, the automotive giant will spend anywhere in the region of €1 million on developing and perfecting safety systems. Collision Prevention Assist Plus is just one system demonstrating Mercedes’ evolving strategy to improve safety for drivers on the busy roads. In the past, the standard system of choice for most models was Pre-Safe. It’s a clever bit of software that protects the occupants in the event of an accident, by doing things like closing the windows and sunroof, and tensioning the seatbelts ready for a collision. Whilst this is great, research conducted by Mercedes-Benz told them that in two-thirds of all accidents, there is sufficient time to initiate precautionary measures before an impact. Hence the arrival of Collision Prevention Assist Plus.

This is a radar based distance warning feature, to alert the driver that the distance between them and the vehicle in front is insufficient. If necessary the system can perform partial autonomous braking (up to 60% of full brake pressure) if the speed is below 105km/h. The software can also limit the damage of a rear end collision, by adjusting the brake pressure to exploit all of the available distance. For the most part though, the system won’t even get to this stage. The little red triangle that pops up on the dash is often enough warning to tell you to drop back to a safer distance and keep an eye on the road. If the distance starts to get shorter rapidly with no input from yourself, you’ll get a flashing triangle and a beeping. I suppose the only way you’d miss the beeping and flashing would be if you’ve fallen asleep at the wheel. But then the Attention Assist would have picked that up and told you to take a break, so you’re covered in that department too. Very clever stuff indeed.

At some point in the future, it would be good to do a long term test of the Mercedes-AMG C63, just to see if it really is a viable option for a daily driver. If you can stomach the fuel costs, I imagine this is a great option for a petrol head, looking at practicality combined with a high performance V8. Fans of the predecessor may be upset with the move to forced induction, but for me it doesn’t matter. As long as it remains V8 and it continues to inject tones of thunder into your surroundings, it’s still a C63. It’s one of the few cars on the market to inject adrenaline into your bloodstream just by looking at it, because you know what’s going to happen to your world when you start the engine. The noise dampens every other sense in your body and it takes over everything. And I love the way it turns from a subtle deep rumble to a snarling monster in such a short space of time. Even with all of these safety systems, it’s not a force to be reckoned with. Treat it with respect and it will be loyal forever. Overestimate your abilities as a driver before learning it’s character, and you’ll be thrown down the road sideways in a matter of seconds.