The Honda CRV is one of the most popular crossovers-slash-SUVs sold worldwide. After all, it’s got all the things you need out of a family runabout, and more. It’s practical, versatile, well-built, reliable, as well as being pretty good value, and comes with a decent set of features. Besides, it’s a Honda, so it’ll probably last a long time, right? Well, we wouldn’t be discussing the best CRV year if that was so.

While we might’ve grown up with the image that Honda builds ever-lasting cars, the reality isn’t that simple. For the most part, that stereotype rings true… Get a Honda, and you’ll likely not have to be all too worried that it’ll die on you. Nevertheless, reliability issues may come about every once in a while. This is especially true in the case of Honda’s midsize SUV, which has had its fair share of problems.

Throughout its lifetime, the CRV has suffered odd troubles like cracked windshields or bad door locks. These aren’t so bad once you account for their bad fuel pumps, unreliable safety systems, oil dilution, odd vibrations, the smell of gasoline, chewed-up wiring, and more. That’s just barely the tip of a vast iceberg that you should be aware of. So then, what is the best CRV year that you should pick from?

First off, and before we dive deeper into finding the best CRV year, let’s look at a summarisation of its many generational updates. Here in the US, the CRV was sold across 5 model generations: 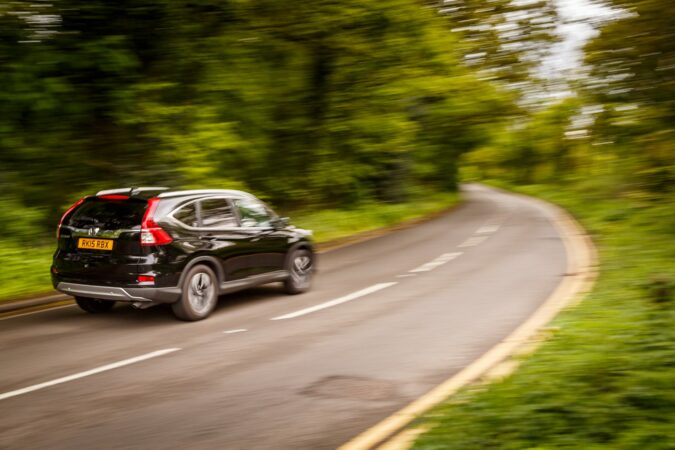 To help narrow it down even further, it’ll be handy to look at how the entire generations of the Honda CRV fared when it comes to reliability. To manage that, we’ll be relying on data from a large collection of documented reports on carcomplaints.com. These repositories contain complaints from actual CRV owners, including the problems that they faced, as well as how they fixed them.

Combining all that data together, carcomplaints.com was able to curate its PainRank score. This is their measuring system to gauge how bad a particular vehicle’s reliability issues are. In addition, what the conditions are when certain things broke. As well as, what it’ll take to get them fixed. Here, we could see that the CRV ranks 21st out of 24 other Honda models for dependability. This isn’t good.

If we break this down further by their 5 specific model generations, we can see how they stack up. In the table down below, we can note that the 3rd- and 4th-generation CRVs fared poorly:

Based on the abovementioned tables, we might be able to more accurately discern as to which is the best CRV year. But before we move on, we should now discuss some of the CRV’s teething issues and reliability concerns. As we highlighted earlier, the CRV (as with most Hondas) is pretty dependable. Nevertheless, you – as the owner – might come across certain issues during your ownership period.

Most of these Honda CRV problems are inconsequential, though some are quite serious. Here are some of the most common and widespread issues plaguing the CRV: With all those issues in mind and having understood a summarised history of the CRV’s reliability and dependability, what is the best CRV year? Moreover, what is the worse CRV year that you should want to avoid at all costs? Well, here’s a TL;DR list of the best and worst years of the Honda CRV:

Note, that some of these CRV model years are fairly recent. Naturally, it’ll be hard to tell how well and headache-free these CRVs will be down the line – once they’ve aged. In particular, we’re looking at the 2020 and 2021 model years. Nevertheless, based on inputs from owners and pundits thus far, it’s been holding up decently well. So, let’s take a deeper dive into each one of the worse and best years.

What if you desire a reliable example from the best CRV year, but don’t want to spend the extra on a brand-new unit? In that case, the 2016 model year Honda CRV is well-regarded to be a great option. It’s relatively new, and thus carries most of the same tech, functionality, and gizmos that you might want in a new car. Yet, it’s old enough that you can buy it second-hand for a relatively good price.

Moreover, it’s worth remembering that the 2016 model year is the last of the 4th-generation CRVs. It means that with several years ahead to solve any lingering issues, the 2016MY is relatively refined. In addition, most of the common problems with the 4th-generation CRV would’ve likely been solved and updated when the 2016 model year CRV came out. Hence, why it’s comparatively more reliable. We’d rank 2016 as the best CRV year, owing to the rather low frequency of major issues. Although, a few problems and concerns may still appear if you own or are planning to own a 2016 CRV:

If you don’t mind missing out on the luxuries, the 2006 model year CRV is still pretty good, despite its age. Of course, being an older variant means that you don’t get fancy nice-to-haves like active safety systems or driver aids. In all, it’s just as practical, versatile, efficient, and reliable as any other CRV. It should also be noted as to the great residual values that the 2006MY CRV has maintained.

Despite aging a decade and a half now, they’re still holding their prices strong. This is mainly due to the 2006 CRV’s track record for solid dependability. It’s great for concerned parents too, given their excellent safety ratings. The 2006 CRV earned a perfect score from the NTHSA for side impacts. Plus, the 2006 CRV was – like 2016 – the final model year from its generation, the 2nd-gen CRV.

Therefore, it’s a more refined vehicle than in earlier years. Although, given how long it’s been now that it’s 2022, long-term wear or mileage-based servicing may be required. So, be wary of these issues:

There’s not much to be said about the 2005 CRV, as it shares a lot with the 2006 model year. This can be a good alternative if you can’t find a decent 2006 model year CRV for sale. Just like the later years, the 2005 CRV is a generally well-built and robust vehicle. Owing to the fairly low quantity of problems (in particular, complex and expensive issues), the second-hand values of the 2005 CRV is still high.

Even after all this time, we’d certainly rank the 2005 model as one of the best CRV years. Just be wary of any issues that you might experience, such as:

We’ve skipped the 2020 and 2021 model year CRVs for now, as there isn’t yet enough data to suggest that either is the best CRV year. Although, it’s been promising thus far. For now, we’ll skip to the 2019 CRV, which is similar in specifications. Compared to most of its rivals, the 2019 CRV is considered to be one of the best picks in its class of crossover SUVs. This is partly due to its interior design and layout. While smaller than its rivals, the 2019 CRV is roomier inside and has more impressive tech. Moreover, the 2019 CRV is pretty fuel-efficient, which further adds to the perks that you get with buying one. It’s a neat alternative if you need to get something more contemporary and up-to-date compared to that 2016 CRV. Just make sure that you watch out for these reliability issues on the 2019 CRV:

If you are looking at getting a 1997 CRV, some caution is advised. Those older cars are much simpler to work on, service, and repair. As such, it may prove cheaper to maintain and run. However, at that advanced age (25 years, at least), major components like the engine or transmission would require a rebuild or restoration. Depending on the condition, you might have to do a whole lot more.

With that being said, it can cost a lot of money for a restoration. But if you really want a vintage CRV, the first model year of 1997 is a pretty good one. It’s an intuitive, easy-going, and user-friendly car to drive. And despite being an old SUV, it’s also surprisingly fuel-efficient and comes with AWD. Over the years, it’s subsequently garnered a reputation as a long-lasting car, barring these issues:

NOTE: There isn’t as much reliable data on these early model years around 1997 and thereabouts.

If you wouldn’t mind opting for what is literally a modern classic at this point, the 2001 CRV is a solidly built tank. Most owners are satisfied with its running costs and reliability, even though it’s been more than 2 decades since. It’s no small wonder why the resale values, despite their old age, are still fairly high. There are other reasons why many people hark back to the 2001 model year as Honda’s best.

It features a powerful all-wheel-drive system, which is even good for adverse terrain such as snow. It can add and manage traction very effectively between the front and rear wheels. Other than that, a lot of owners also loved the suspension setup with the old CRV. They’ve found it more comfortable, especially during long commutes. Some of the problems that you might encounter are:

Now that we’ve looked at the best CRV year (2016 model year), it’s time to disseminate the worst. To ensure brevity, we’ll make this one short, as you should avoid these CRV model years: FAQs On The Best CRV Year

If you still have some unanswered questions on the best CRV year (which is 2016, and others that we listed earlier), our FAQs here might help…

What Does CRV Stand For

Conceived as Honda’s do-everything crossover-slash-SUV, they’ve named this the CRV. Or, in certain spellings, the CR-V. Note, the term Crossover wasn’t yet as popular back in the 90s as they are today. Hence, Honda decided to call its crossover the CRV. There are officially two definitions for what CRV abbreviates from. It’s either Compact Recreation Vehicle or Comfortable Runabout Vehicle.

How Long Do Honda CRV Last

Despite some of its reliability pitfalls, the Honda CRV is a very long-lasting vehicle. Some estimate it could last around 15 to 20 years before any major rebuild is necessary. Although, there have been some instances where the original 1997 CRVs are still seen driving around in 2022, 25 years later.

How Many Miles Can A Honda CRV Last

The exact number of miles that the CRV will last is highly dependent on how you care for it. With a diligent attitude towards servicing and maintenance, it should at least get past 200,000 miles. It’ll easily break into 250,000 to 300,000 or more miles if you really take good care of it.

Is Honda CRV A Good Car

In general, the CRV’s mass appeal and popularity show that it’s certainly a good car. Being a Honda, it’s typically more dependable than most other competing brands. Additionally, you can hope for an abundance of practicality, ease of use, fuel efficiency, and good build quality. Driving it, the CRV is comfy and easy to maneuver, despite its size. Speaking of, the interior is spacious, which makes it a good family runabout. If you’re in it for the long term, CRVs tend to hold on to their value really well, too.